On March 3, Nintendo released it’s latest video game console, the Nintendo Switch, to the public. The console has already outpaced the incredibly popular Wii in terms of sales, and affiliate marketing had a key role to play in that success. Learn how retailers who were selling the Switch used various partnerships to help promote awareness about the product and it’s availability, and how that helped Nintendo break sales records in this blog post.

On March 3 the Nintendo Switch, Nintendo’s latest video game console, was released to the public. The release, thus far, has been widely successful and is already outpacing the incredibly popular Nintendo Wii that was released two console generations ago.

Although consoles were available to the public on launch day, they were in limited quantities partly due to high demand, but also because the console had actually been sold out weeks in advance due to online preorders. The affiliate marketing channel had a lot to do with that success. Through the use of strategic affiliate partnerships, retailers were able to optimize their Nintendo Switch release campaigns to ensure that they reached target customers in a number of ways and sell their inventory.

There’s always a demand for the latest technology, whether it’s the newest iPhone, the next wearable or smart home product, or the latest video game console. The Nintendo Switch was no exception to this, and in the months leading up to the product’s release, there were waves of preorders being released by retailers for consumers to reserve their order.

This is where stock tracking publishers were so vital to the consumer. Due to high demand, these preorders would sell out quickly, and because they were released in waves over a period of weeks there was no telling when the retailer would open up their preorders next. Stock tracking publishers do exactly as their name implies – they track the inventory of certain retailers on certain products. A customer can sign up for an alert on a certain product and, when the product becomes available, they receive a message either via text or email that alerts them of the inventory availability so they can make the purchase right away. 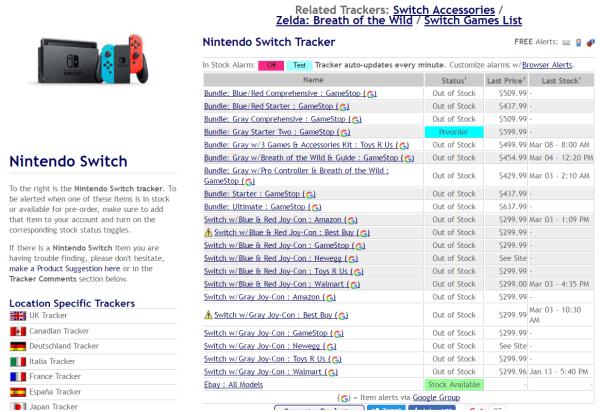 The value to the consumer for a situation like this is crucial: not only are they getting real-time alerts on an in-demand product they’re looking for, they’re also able to relax until the alert comes in. That means no constant refreshing on product pages, just sign up for the alert and wait. Publishers like NowInStock (SID: 1709054) were critical in helping retail advertisers generate sales from customers looking for the Switch.

When a new product is released there’s typically no discounts to be found, so deal-savvy consumers need to search elsewhere for deal opportunities. That’s where loyalty sites and cashback sites become so valuable: it allows consumers to get a little bit extra out of their purchase, even though the purchase itself has no discount.

In the case of the Nintendo Switch, many of the retailers offering preorders on the Switch were also partnered with loyalty sites or cashback sites. Ebates (SID: 23803), a cashback site, helped drive a high number of sales for one video game/electronics retailer by offering a cashback deal that consumers could capitalize on when they preordered.

Similar trends are often seen in the luxury brand vertical where products often don’t have heavy discounts, but consumers are still looking to get the most value out of their purchase. A cashback or loyalty sites that reward consumers for shopping can help convert consumers who are on the fence about making the purchase, or even compel a consumer to shop with a particular advertiser over another because they can get more value through third party loyalty/cashback programs that partnered with that advertiser. The same principle can be applied in this case from a lack of discounts, high demand, and limited availability. The results show just how critical these programs are.

Content sites are extremely valuable whenever a new product is getting released, and the Nintendo Switch was no exception. The video game console was not only new but had unique features (the ability to play on a TV or take the console on-the-go much like Nintendo’s Game Boy and DS systems) as well as hardware and software that many had questions on.

Using a wide range of content partners enabled retail advertisers to spread awareness of their availability, but also ensure that their consumers were motivated to make the purchase because of things that they’d learned about. Sites and content publisher networks like Future Publishing Ltd (SID: 2294204) and The Daily Dot (SID: 3320105) were able to reach a wide range of consumers and detail the basics of the console: what it was, who it was for, how much it would cost, what the benefits were, and so on. However, retailers also used niche content sites to promote to a more focused audience. For example, content sites like IGN (SID: 2712270) and Nintendo Life (SID: 2639854) cater specifically to video game enthusiasts, but while IGN focuses on the entire gamer population, Nintendo Life caters more to the hardcore Nintendo fans. Both had important roles in conveying information to their respective audiences to help motivate their readers to make an informed purchasing decision.

This doesn’t mean that the audiences were isolated to one content site. Savvy shoppers will want to get as much information as possible, and it’s not hard to imagine a consumer visiting a news site to see what general media is saying about the product, visit a video game specific site to get more details, and then check out a Nintendo specific site to see what fans of the company are saying and feeling to get a different perspective. This content journey could work in any number of ways, but one thing remained consistent throughout – these publishers all offered the opportunity to go to a product page and make the purchase as soon the consumer was ready.

In addition to being informed about the product itself, these sites also served as a way for advertisers to link to additional products related to the Nintendo Switch. The game Legend of Zelda: Breath of the Wild was highly anticipated and met with universal critical acclaim and customers used these sites to read reviews on the game itself, find out about the Breath of the Wild Special Edition and Master Edition packages (which came with exclusive items), or even learn the history of the game/series. Content sites also provided insights on what additional products could be purchased for the Nintendo Switch such as additional controllers, carrying cases, screen protectors, and more. Finally, content sites could also provide insights on what was coming in the near future for the Nintendo Switch. That way a customer may purchase a Switch at launch with the anticipation of purchasing more games in the coming seasons such as Skyrim, Super Mario Odyssey, and Splatoon 2, among others.

The success that Nintendo has seen with the release of the Nintendo Switch is huge, and the affiliate channel can be partly attributed to that success. By strategically partnering with stock tracking publishers, loyalty and cashback programs, and a variety of content publishers, advertisers selling the Nintendo Switch were able to ensure that customers were aware of the availability of the product, why that product would benefit them, and how they might be able to get additional savings on the product.