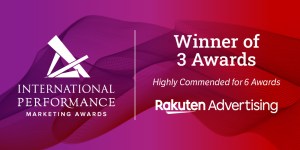 Rakuten Advertising is honoured to have won Best Incentive Partner Campaign or Strategy, Best Use of Programmatic and Best Paid Social Campaign at the 2020 International Performance Marketing Awards (IPMAs).

After being named Publisher’s Choice of Network and winning Best Managed Affiliate Programme at the PMAs earlier this year, the Rakuten Advertising team walked away with three award wins and six high commendations from the virtual ceremony held yesterday, including:

Rakuten Advertising partnered with AMEX AU to run campaigns for 24S, Coles Liquor and Harvey Nichols. Through targeting consumers who have purchased from competitor stores, AMEX AU was able to help 24S exceed AOV target by 250% while increasingly gaining new customers. AMEX AU also supported Coles Liquor through the revenue downturn caused by the global pandemic by bringing existing and lapsed customers online. And being new to the Australian market, Harvey Nichols managed to increase its sales by 85% as a result of the partnership.

Of this win, the judges commented, “This campaign showed a great use of first-party data, and how to use it effectively to help generate incremental sales.”

Liberty London and Rakuten Advertising’s display strategy goal was to demonstrate the incremental value of the channel. Partnering the best of programmatic technology with human insights and expertise, results showed that creatives using brand lifestyle imagery drove a 24% higher conversion rate than product feed-only designs. Overall, the campaign outperformed the incremental ROAS target by 19% and provided detailed and invaluable learnings to contribute to the future of Liberty London’s display marketing.

Of this win, the judges commented, “The campaign delivered strong performance results across multiple metrics.”

The Molton Brown Friends and Family promotion was a huge success, thanks to the strength of the brand’s partnership with Rakuten Advertising. Molton Brown needed its campaign to align with the 2020 goals of conversion growth and budget efficiencies. However, creativity was needed to formulate an innovative strategy to target potential customers in a way that would be sensitive enough during the current climate. The campaign trialled new ways to reach audiences, effectively combining both manual and automated optimisations, and utilising Molton Brown’s first-party customer data. This led to a 160% YoY growth in ROAS – smashing the original 20% ROAS growth target.

Of this win, the judges commented, “Clever optimisation for such a short-term campaign, with a number of hurdles including messaging related to the pandemic.”

On winning the awards, Anthony Capano, MD of International at Rakuten Advertising, commented: “I’m thrilled with the success of Rakuten Advertising at the International Performance Marketing Awards. We were proud to have received so many nominations; to have come home with major vertical wins and high-commendations, including Best Paid Social and Best Incentive Partner Campaign, is outstanding.”

We’d like to congratulate and thank all our team members, advertisers, and publishers once again who made these wins possible. Congratulations also go out to all who were shortlisted and winners at the 2020 International Performance Marketing Awards.