The Power of Context – A Messaging-First Society 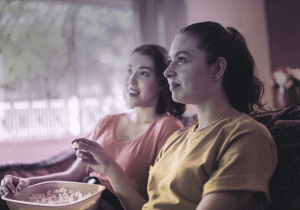 Messaging is an endemic, global behavior across social and demographic groups – it’s an undeniable truth. As such, those behind advertising campaigns need to treat messaging platforms as a key facet of a successful media plan. This allows them to reach some of the most engaged, focused consumers at a time when they literally have their device (and therefore the advertising real estate) in hand.

Tapping into a human need

You’re in the middle of something and a messaging notification pops up – do you ignore it and carry on, or do you quickly check? The answer is, most likely, the latter. As humans we like contact, we like to feel needed, and we like to feel involved – and messaging ticks all of these boxes. As such, messaging taps into a primal need to feel connected to other humans as it’s highly personal and – in the main – private.

This is a key reason for its rise, coupled with the growth of apps through which we stay in touch. The fact it’s seen as less intrusive than direct phone calls, yet still instantaneous makes it all the more appealing.

As a result, messaging has become the primary means of staying in touch with friends and family. A recent survey from Rakuten Advertising shows that across the globe it tops the list above phone calls, live video, and email (in that order).

This preference level is perhaps a reflection of the longevity messaging brings. When asked if they felt more connected to their family through the use of messaging apps than they did five years ago, 67% of respondents globally agreed.

There can be little doubt that the increasing sophistication of messaging apps with the ability to share images, gifs, stickers, and emojis is helping to bring basic text to life. Such rich media options inherently brings more emotion and personality to messages, and this increases the resonance of the experience further.

Consumers are used to having such functionality and rich media on social networks and bringing much of this to messaging apps is further blurring the lines.

As can be expected, the lockdown periods during the pandemic increased the use of messaging apps. This is no surprise – physical distance increased the need for remote communications, and while phone calls increased, so did texting.

But such behaviors haven’t waned as Covid-19 has. The majority of respondents agreed that these behaviors remain to this day; the habits born of the pandemic have stayed. People have become used to them and adopted the ease of use, convenience, and unobtrusiveness.

When asked if Increased use of messaging apps during Covid-19 isolation has remained beyond lockdown a global average of 70% agreed. This is something media planners, strategists, and agencies must take into account; the increase in 2020 was no flash in the pan, and messaging must be considered an integral part of any media strategy.

Right place, at the right time

Messaging is ubiquitous. Our mobile devices are in-hand throughout the day, with messaging apps open and, crucially, being used. It’s become part and parcel of our lives at every point – as was made evident in the results from the recent survey.

We can look at specific scenarios to demonstrate this. When asked where they used messaging apps, 26% of respondents globally cited doing so at the gym; 47% on their commute; 58% while on their holiday; and 48% while traveling abroad. Usage while listening to a podcast and at work also featured highly.

For brands this means messaging is more than a channel – it’s a moment to harness. The fitness fanatic, for example, is messaging while they work out – so lifestyle, fashion, nutrition, fitness, and sports brands need to consider this as a primary platform to engage with the consumer.

It’s a moment when your target audience is in a frame of mind to receive advertising which resonates with what they’re doing – it’s a contextually relevant prompt which will land better.

What does this mean for an advertising strategy?

In short: you can’t ignore messaging within a successful advertising strategy. Media buyers and planners need to consider how to integrate it alongside other platforms and ensure that it becomes embedded as an engagement channel.

To make the most of the opportunity, media planners must take an iterative approach: look at the increase in conversions on mobile devices and target consumers where (and when), they choose to spend their time messaging.

Download “The Power of Context: Advertising Beyond Data” for more insights into how consumers are engaging with messaging apps.