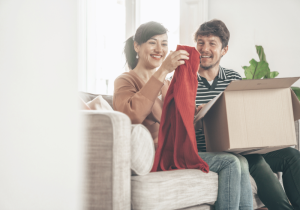 It’s true what they say, most people do most of their holiday shopping during peak sale season in November, but as of late, consumers are starting to shop earlier to spread out the cost.

Of the shoppers we surveyed, nearly half said they typically start their holiday shopping in November. Another 18% start shopping in October and only 10% in September. 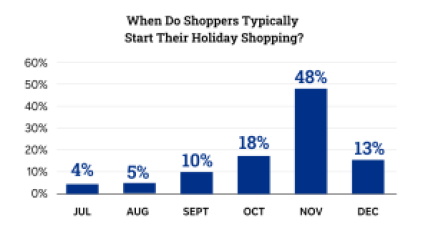 Women are responsible for most of the early shopping activity, with 34% starting before the end of September compared to only 13% of men. Most men tend to start their shopping later in the season, with 55% starting in November and 16% waiting until December. In fact, 14% of the men surveyed said that they do not shop for any holiday items at all, versus just 7% for women.

As marketers reach out to those early shoppers, they should take the time to tailor their messages accordingly, as it could pay off with strong sales. 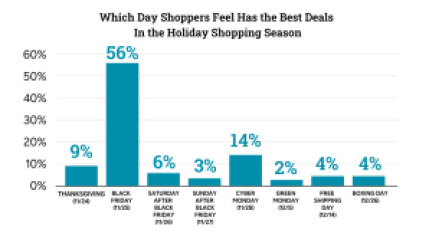 For a few years, Black Friday was consistently the highest grossing day of Cyber Week sales in the Rakuten Advertising US network, so we asked shoppers specifically about which shopping days during and after Cyber Week that they feel they are getting the best deal.

The majority of shoppers (56%) felt that Black Friday still has the best deals of Cyber Week, followed by Cyber Monday with a strong 14%, and then Thanksgiving Day at 9%.

Budgeting for This Holiday Season

Budgeting in 2022 has been tricky as consumers grapple with supply chain shortages, inflation, and other economic factors.  Despite this, our survey showed that a budget of $500-$1000 is the most popular range, followed closely by the $250-$500 range.

Age plays a factor in budget choices, as over 50% of shoppers below the age of 25 and over the age of 65 plan to spend below $500 on holiday shopping. 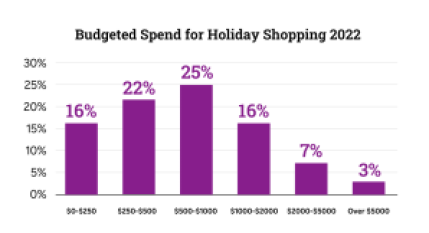 Inflation is causing many shoppers to change up how they are planning to spend their holiday budget.

Women are more likely to lower their budgets and/or decrease the number of items they plan to buy during holiday shopping, opposed to 19% of male shoppers who just plan to pay more for what they want to purchase.

However, 36% of respondents overall said they have made no changes to their budget or the number of items they expect to buy, indicating that they most likely have not set a budget at all. 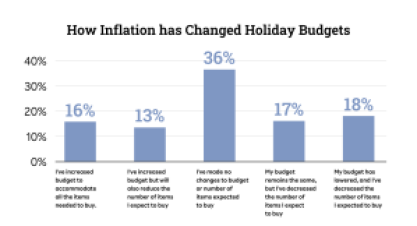 In July 2022, Rakuten Advertising surveyed 15,000 US consumers about their holiday shopping plans and expectations. Respondents were aged 18-70  and were equally split between men and women with incomes over $25k a year.