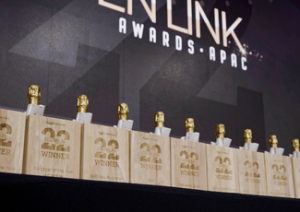 The Golden Link Awards, Asia-Pacific celebrates Rakuten Advertising’s most innovative and exceptional affiliate campaigns, teams and companies across the region.

After two years of virtual award ceremonies, we were excited to host this year’s ceremony in-person, closing DealMaker APAC in style. Hosted by our very own Hannah Da Silva, the ceremony was an evening of celebration, entertainment and inspiration for all Golden Link Award finalists and DealMaker attendees.

The 2022 awards had eight categories spanning all areas of affiliate marketing, as well as two peer-nominated categories. Nominations were open to all APAC advertisers, publishers and agencies. This year, we had a record number of entries and our esteemed panel of judges had their work cut out for them to select the winners. A huge thank you to our judges for supporting our awards:

We’re thrilled to reveal the winners of this year’s Golden Link Awards, Asia-Pacific.

Manager of the Year (Publisher)

Manager of the Year (Advertiser)

Campaign of the Year

Advertiser of the Year

Publisher of the Year

Commenting on the Golden Link Awards, Stuart McLennan, Senior Vice Present of APAC at Rakuten Advertising said, “We had a record number of entries with incredibly high calibre this year. Our advertisers and publishers on the Rakuten Affiliate Network truly demonstrated what it means to be strategic and innovative. They thrive on real performance and real results and continue to push the industry forward. Congratulations to all the winners and highly commended.”

On behalf of the Rakuten Advertising, a huge congratulations to the winners and highly commended entries and thank you to everyone who participated in the awards. We look forward to seeing you again in 2023.