The Power of Context –How Streaming is Turning Viewers into Buyers 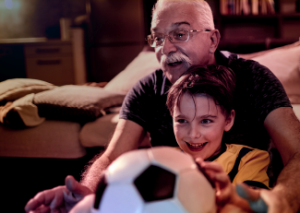 The effectiveness of advertising on streaming services has never been more potent, as demonstrated by the latest global research by Rakuten Advertising into viewer behaviours. The reason for this optimism is two-fold:

This combination of scale plus impact makes CTV an essential component of media planning.

To take advantage of this media planners need to understand how to integrate CTV into wider media strategies and deliver a call to action that takes the brand from the TV and into the browser search bar.

To achieve this, it’s important to first identify where the target audience is. Who is the client looking to engage and prompt to action, and what content they are watching? Once these are identified, it’s key to be visible during these periods – it means the advertising doesn’t jar and instead becomes part of the experience. This is what drives resonance and action; there’s power in the smart use of contextual targeting.

The 41% global figure is matched by the UK but rises as high as 52% in the US and 56% in Brazil, demonstrating to agencies in these markets that CTV is ignored at their peril. In Europe, Spain tops out at 50%, with Italy and Germany coming in at 34%. Although not as a high as other markets, one-in-four French viewers prefer watching streaming services.

Encouragingly for media buyers, while there’s a natural inclination to CTV preference among the youngest age groups (18-24 years-old, 25-34 years-old), these aren’t massively higher than those aged over 50. It might be expected that there’d be a significant drop-off in viewership post-Generation X, but baby boomers are as keen as anyone.

Breaking down the stats further, and the male / female split in streaming viewers balances out across the board except for the UK where 30% more females watch CTV then male.

This means agencies can’t ignore the fact that clients can reach their demographic through CTV – it’s not purely the domain of younger, dynamic, youth brands. And with the riches on offer via streaming services, aligning advertising with the content that the audience is watching puts the brand in the right place at the right time to resonate.

Importantly, as with traditional services, CTV viewers are holding devices while engaging with what they’re watching; browsing and the use of messaging apps is dominant, with the former featuring higher than the latter. In addition, over 80% in all markets are browsing generally, or for specific products while viewing streaming services – purchase power is literally in the palm of their hands.

However, this shouldn’t be interpreted as an indicator of distraction – brand impact can be directly witnessed in viewer purchasing behaviour. Across the board, the majority of respondents stated they purchase or occasionally purchase the product or service they have searched for, having seen it advertised via CTV,

For agencies, this brings huge opportunities through moving brand awareness from the biggest screen in the house and onto a smaller one to browse and – as our survey demonstrates – to purchase.

Putting this into action

The figures on purchasing behaviour alone demand action, especially when considered alongside the levels of streaming as a preferred means of watching content.

To maximise the rewards on offer, media planners must consider the client’s target audiences as a collective of individuals who share the same viewing behaviours. Once understood, these viewing habits will inform where to buy inventory smartly and align the advertising with the intended viewer.

From here, it’s key to align such strategies with viewing peaks. New boxsets and the latest blockbuster drops both bring an influx of viewers eager to indulge. So, act upon it – these are concentrated periods of time to buy within when the viewer is most engaged.

This use of context acts as a strategic integration within a wider advertising strategy – with ‘integration’ the key word.  Because while CTV has the power to deliver action without relying on individual data points, it can’t become a silo and must be measured as part of the whole campaign.

Agencies can’t ignore the fact that online and mobile browsing exists while viewers are leaning in. Instead, media plans must consider the potential of seamlessly turning awareness on the big screen into a click on the buy now button.

Looking for more information? Download our latest report The Power of Context: Advertising Beyond Data.