How the Starbucks Pumpkin Spice Latte Became a Fall Icon

Despite living in the Midwest now, I was born and raised in Boston and consider myself a New Englander through-and-through. That means I have an affinity for seafood, think Tom Brady is the greatest human being to ever walk the earth, and an undying love for the fall season. Foliage, sweater weather, apple picking, haunted hayrides, and especially pumpkin spice coffee. I have a year-round obsession with that beverage to the point where I’ll stockpile as much as I can to try and last me from November to August/September, the same way a squirrel stockpiles nuts.

Simply put, I love pumpkin spice coffee to the point where it’s part of my identity. But then again, so do plenty of other people. Pumpkin spice coffee (or, to be really specific, pumpkin spice lattes) have become iconic during the fall. How did this happen though? How did a few spices blended together and placed in a coffee become so crucial? In a few words: Starbucks and great marketing happened.

So, in this edition of Casual Friday, we’re going on a little historic walking tour of how creative marketing over the past 13 years turned the pumpkin spice latte into an integral part of the autumn experience. 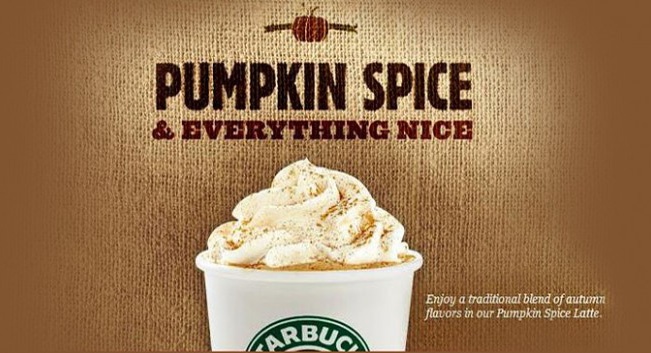 Imagine you’re a bigwig at a global coffee chain that’s headquartered in Seattle. (Or, if you are that person, imagine that you’re you.) It’s early 2003, and your company has just enjoyed success by offering seasonal beverages like eggnog lattes and peppermint mochas to your customers. You want to replicate that success for more seasons, but how? You think about the fall and your mind starts to cycle potential coffee flavors when suddenly it hits you.

After a few iterations with the name (because naming was never your strong suit), you’ve come up with the idea for a pumpkin spice latte. You don’t know it yet, but your idea is going to kick off a revolution.

That’s how I imagine the creation of a Starbucks pumpkin spice latte happened in my head. Some of that story is an artistic reimagining, but there are some truths. In 2003 Starbucks was looking to replicate the seasonal success of their winter drink offerings, and fall seemed like a natural fit. Pumpkin spice flavoring wasn’t super popular (at least, not in the way we know it today), and Starbucks felt they could fill a demographic.

And boy were they right.

Long story short, pumpkin spice lattes are a big deal. They’re not an afterthought or a nice seasonal bonus like other beverages, they’re definitive to the season. And plenty have tried to replicate that success in other products. Walk through a grocery store and you’ll spot pumpkin spice coffee creamer, bread, Cheerios, and gum. Drop by a local pub or liquor store and you’ll find that almost every brewery big and small has a pumpkin edition of their beverage. You can even find pumpkin spice liquor. Other places even rolled out their own pumpkin spice beverage to compete with Starbucks’, from Dunkin Donuts to 7 Eleven. However, Starbucks and their pumpkin spice latte will be remembered as the reason why pumpkin spice became so important.

Just as the NFL was able to claim a day of the week as their own, pumpkin spice was able to interweave itself into an entire season’s identity. This didn’t just happen by accident, but being able to continually stand out as more products enter the pumpkin spice fray every season means Starbucks needs to continuously be reinventing their marketing approach. For 13 years they’ve done just that, and there’s something incredible to be said about that.

The product itself is great, and clearly it’s popular, but it didn’t become iconic just by being great – there was a big marketing effort to elevate and maintain that status. You need to know your audience so well that you can anticipate them, and Starbucks seems to have mastered that in regards to the pumpkin spice latte.

As more brands rolled out a pumpkin spice edition of their product, the market started to saturate. People could get their pumpkin spice fix almost anywhere, but more importantly the term “pumpkin spice” or “pumpkin spice latte” may not be as synonymous with Starbuck’s drink. In order to stand out, Starbucks had to take their marketing one step above the rest. As of 2015, here are some of the things Starbucks has done:

So, let’s recap this: Starbucks created a product that people loved. Realizing that people loved it so much and wanting to stand out in an increasingly saturated pumpkin spice market, Starbucks rolled out a Freemasons-esque secret society that is organized on social media and will even create content promoting the product in exchange for exclusive early access before it rolls out to the public. Weird? Maybe over a beverage, but how much weirder is it than waiting in line for days for the latest release of a smartphone, or going to the premiere of a new sci-fi movie dressed as one of the characters? Starbucks just took it one step further by using their marketing as a way of interaction with their fans to make the experience much more personal. I can’t stress enough how smart that was.

Today’s top story: Use the PSL Fan Pass to get your #FirstPSL early https://t.co/lAb7esRzx4 pic.twitter.com/s6XCLiKSgX

In the age of social media fans are closer than ever to their fandom. They don’t have to wait to go to a Comic Con to interact with their favorite celeb – they can tweet at any iteration of Batman they want and start an interaction digitally. Fans love that, and Starbucks was savvy enough in their marketing to recognize this and create points of interaction with an inanimate object: a cup of coffee. They cultivated a culture for a fandom that already existed, and in doing so became a contemporary seasonal staple. You’re not just buying a cup of pumpkin spice when you go to Starbucks, you’re participating in a seasonal pastime that was fostered by brilliant marketing strategies and promoted by a community of fans.

I’m not editorializing when I say this is absolutely genius. These marketing tactics have won Starbucks awards in 2014 for their creativity and ingenuity. If you read their award-winning entry, you’ll see that Starbucks didn’t do any of the above by accident or get lucky – there was a clear, focused plan to foster a community around a product and add a personality that customers can identify with and buy into. In their own words on the entry form, Starbucks’ campaign deserved to win “because it engaged customers in a truly authentic way.”

And maybe while you do that, enjoy a pumpkin spice latte. I know I will be. My New England roots wouldn’t have it any other way.