Will 2017 be the Year for Augmented & Virtual Reality Marketing?

Imagine if travel companies could literally give potential customers a walking tour of Osaka or Frankfurt before the travelers ever booked a ticket. Picture a car shopper touring a showroom from the comfort of his or her own couch. These are just a few ways virtual reality is becoming critical to marketing efforts, with many more on the 2017 horizon. And that’s not all – augmented reality is starting to take off majorly, and can continue to grow at a rapid rate thanks to the potential of Snapchat’s first hardware product, Spectacles. Finally, with native marketing becoming so prominent, we take a look at some of the most important challenges content publishers are facing. All this is in this October edition of Industry Insights.

The past year in technology will be remembered for many things, from a lack of headphone jacks to exploding phones, but one key milestone will undoubtedly be virtual reality (VR) headsets. VR headsets have been buzzing among technology headlines for some time, and this year Sony’s PlayStation VR, HTC’s Vive, Samsung’s Gear, and Facebook’s Oculus Rift all released during the 2016 calendar year. Models varied in their usage, with some taking advantage of compatible smartphones (Samsung and other brands) and others leveraging the power behind PC’s (HTC and Facebook) or video game consoles (Sony and their PlayStation 4). While VR experiences may not be totally new among techie groups, the mass market production of these headsets hopes to bring average consumers into the world of virtual reality. 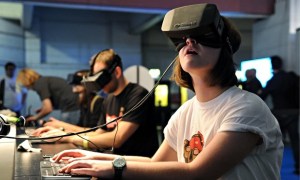 With this new technology, marketers are already finding unique ways to implement their own strategies into a VR world. The headsets already offer a “theater-like” experience for video watchers, meaning content creators who utilize video can create an even more immersive experience for their viewers. This is great news for content publishers, but it’s only the tip of the iceberg. Companies are investing in these immersive experiences by trying to take full advantage of VR’s capabilities. This means travel companies can give potential travelers a 360-degree, fully immersed view of a destination they’re interested in visiting, auto companies can have a virtual showroom to show actual-scaled versions of cars, and ticket vendors are creating virtual concert experiences. Even Hollywood is getting more invested in VR, releasing fully immersive trailers for movies. (Warning: the linked trailer is for the horror movie The Conjuring 2. Try the experience on a smartphone for an idea on VR’s capabilities, but be ready for some jump scares.)

VR is a game changer for marketing, and the pace could be set in 2017 to see the “VR Marketing Revolution” take place. The benefits are there: VR enables customers to have an amplified user experience with a product that will create better brand recall and help drive them to a purchase. Additionally, brand integration with storytelling can become much more realistic and immersive, something that benefits content creators as well as advertisers. In an interview with Mashable Anna Bager, the Senior Vice President of Mobile and Video at the Interactive Advertising Bureau, highlighted that VR will be big for marketing going forward, saying:

“It’s becoming increasingly important and more and more talked about. We have to learn here. It’s a completely new virtual world…It’s not necessarily about ads, it’s about helping media companies create great content or specific content for your customers. That’s really where the bigger opportunity lies.”

In other words, advertisers have a lot to gain from VR, and as far as the affiliate channel is concerned publishers can work with advertisers to create more in-depth, memorable content that tells a story and connects with a customer. 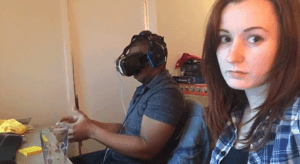 While VR shows tons of marketing promises, there are drawbacks currently. The chief concern is there’s a fundamental discovery problem with this type of hardware – apps and content all need to be created with VR in mind. This creates a limited ecosystem and content that, while it could be displayed on a VR headset, doesn’t take full advantage of the capabilities that VR offers – yet. There’s also the issue of cost – VR headsets are still expensive, and also require additional hardware to run such as a PC or game console. Even with cheaper alternatives to create a VR experience (such as Google Cardboard) the high expectations of a fully-capable VR headset with the price point that meets the average consumer’s desires is still not there. You also have the concern of user fatigue. Users are reporting that they can only wear headsets for a short amount of time before feeling dizzy or sick, and others struggle with the disorienting experience of being immersive but not real.

“For publishers, agencies and networks, the potential within the [early adopter] segment can’t be stressed enough. The study found that that these consumers watch [about] five more television networks in a given month than the average consumer, they spend 8% more time watching television and they spend 7% more time online…[they] also outspend the average consumer in most purchase categories, including nearly twice as much on live event tickets (195%), quick-serve restaurants (179%) and alcoholic beverages (175%).”

Snapchat – recently rebranded as Snap Inc. – recently announced their first physical product…a pair of glasses. To be more specific, a pair of glasses with built-in lenses that allow users to capture photos from the glasses and connects to the Snapchat app via Bluetooth. In addition, the camera also takes circular videos that captures “a 115-degree field of view” which is about the same as the human eye. The goal is to recreate exactly what a wearer sees and share that experience with their friends – or followers.

The glasses are being promoted by Snap CEO Evan Spiegel as a novelty toy that should be worn for fun, but Spiegel may be underestimating the potential behind the company’s product. With the recent success of apps like Pokemon Go that pushed the success of augmented reality (AR) applications, the Snapchat Spectacles could be a step into user-generated AR content, as well as keeping the door open for VR in the future.

From an initial standpoint, these glasses are already a huge win for content publishers and influencers in the affiliate channel who leverage Snapchat as a platform for interacting with followers and generating engagement. Not only do Spectacles allow users to take and upload pictures much quicker, it also provides a “real time” experience from the user. For a content publisher, this could mean sending a Snapchat video of them interacting with or using a product they’re promoting from their perspective.

But that’s just the beginning. Snapchat has already dabbled in AR with it’s use of animated filters and ability to put dog ears and noses on people’s selfies – so why stop there? The truth is Spectacles has the potential to open a whole new realm of AR in Snapchat’s platform with it’s usage, such as the ability to tag certain filters, add images or animations, or edit the content before being sent while still keeping that realistic perspective. And, since Snap recently acquired Seene and their app that scans faces in 3D, the potential to continue the product growing from AR to VR is also a strong possibility.

The glasses are due out in 2017 and priced with the idea of them being a fun novelty, but the reality behind the marketing is that this is an ambitious push in wearable technology. With the potential growth in AR and VR marketing in 2017, this user-friendly device could be a great way for content publishers to move into the AR and VR marketing channel with their advertiser partnerships, without having to worry if their followers are using headsets or the like.

As Popularity for Native Content Grows, so do Concerns About Quality

It’s no secret that native advertising – from content publishers to influencers – has become very popular with consumers. Even if it’s not the last point of click in a buyer’s journey, content about a product or brand that remains informative while addressing a consumer’s needs or concerns is extremely helpful to a shopper. Advertisers and publishers enjoy the advantages that native advertising yields as well, from stronger brand recognition to the sidestepping of apps such as ad blockers. With native on the upswing, a new concern surfaces: the concern for high-quality content.

According to an eMarketers study, there are many advertisers out there that believe social channels – from Facebook and Pinterest to YouTube and Snapchat – serve an important role in their marketing efforts. Content publishers measure their success based on how many customers they’re able to convert for advertisers, as well as how many potential customers they’re able to reach – the longer the reach, the more potential customers. However, when a piece of content fails to succeed in those goals. Being able to build content that is successful is challenging, and common concern publishers have is that their quality of content is the top challenge to their success, with 37% of respondents feeling this way according to a NewsWhip study. 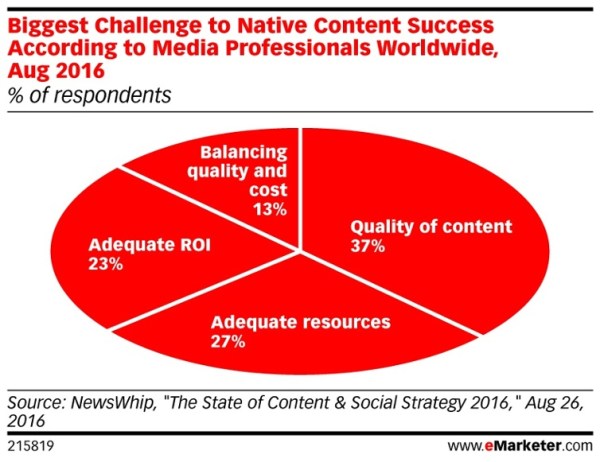 Of course, this isn’t the only obstacle that content publishers see in their road to success. Not far behind “quality of content” was “adequate resources” at 27%, and “adequate ROI” at 23%. For resources, this is highly understandable for content publishers, especially those in multimedia. While written content such as blog posts need only quality ascetics around the words (assuming the content itself is well-written), video content and audio content such as YouTubers and Podcasters need expensive equipment and software in order to ensure that they’re producing content to today’s standards. Standards that continually rise (1080p to 4K for video, for example) and become more of a challenge to meet. When combining the concern for resources with the concern for quality, it’s not hard to see why ROI plays such a factor in a content publisher’s life – they’re continually investing time and money in their effects, with diminishing returns for the more time they spend on getting a single video out as well as money spent to ensure they have the latest equipment and software.

This is a challenge that is currently facing publishers directly, but advertisers aren’t immune. Being able to find a content that publisher that produces high quality content with the resources they have available in a way that makes financial sense to them will be a concern, and something that advertisers must heed when evaluating content publishing partnerships. Solutions, such as paid placement advertising, can help mitigate a lot of the concern, addressing the ROI issue for publishers and motivating them to produce high quality content so that the advertiser’s goals are met and they can continue a partnership. Of course, this isn’t the only solution, and it is important to consider who your publisher is, what their resources are, and how successful they’ve been with their content in order to make successful partnerships.