Industry Insights: How Influencer Marketing Won the Gold During the Olympics

What does it take to earn a gold medal in marketing during the Olympics? Some might say paid advertising, others might argue that ambush marketing is an effective tactic. However, the Rio games this past month proved one thing to marketers everywhere: influencers are a viable and highly effective alternative. And with the growing popularity of native advertising for both customers and marketers, you don’t need hours of analysis to understand why influencers are the champion marketers.

In this edition of Industry Insights, we take an in-depth look at what influencers are doing to be successful, where they do it, and use two recent situations – the Olympics and the Facebook-Adblock Plus volley – to highlight just how important influencers will be to your affiliate efforts both now and in the future.

Influencers: The Platforms They Love Using (and Why They Use Them)

Influencer programs are increasingly popular for advertisers running affiliate marketing strategies. The growth of ad blockers has benefitted influencer marketers by increasing the value of their audience relationships (eMarketer, 2016), which allow them to create and promote content, launch products and inspire action without disrupting user experiences. As influencer marketing continues to rise as an effective marketing strategy, understanding the platforms of choice among influencers becomes more important for advertisers than ever before. 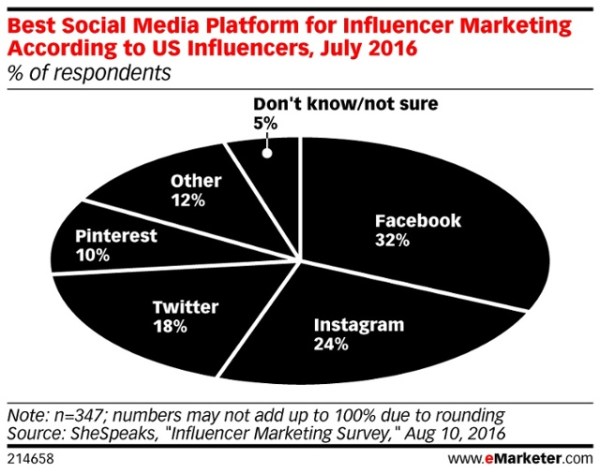 eMarketer conducted a survey in August to evaluate which social media platforms influencers prefer. As the graph on the right shows, Facebook and Instagram were overwhelmingly the most frequently favorited platforms, ranked first by 56% (32% and 24%, respectively) of respondents. Neither of these come as a big surprise since both are great for sharing visual content and adding context without restricted character counts, and are fairly seasoned in advertising success, compared to other social platforms. It is surprising, however, that Pinterest was the least favorited platform, ranking first for only 10% of respondents.

Pinterest is very visual-focused and has more active users than Twitter, though Twitter beat out Pinterest as the favorite social platform for 12% of respondents. The lagging popularity of Pinterest – or perceived lack thereof – is one of the most interesting takeaways from this survey; particularly given its recent allowance of affiliate links, which is an advantage to all other social platforms. With an increased access to monetization and visually focused environment, Pinterest would seem like a prime platform for influencers’ affiliate marketing purposes.

Pinterest is proven to be one of the most powerful platforms for product discovery. With a newsfeed designed to showcase a high volume of posts in each screen, Pinterest exposes users to an exceptionally high volume of content in a single session, with one-step features for saving and sharing everything they like. In addition to opening more space for targeted content, this also establishes Pinterest as a strong platform for acquiring new customers and engendering loyalty. Importantly, the frequency of actions that occur within Pinterest creates a rich understanding of the content that inspires users, which can inform future content strategies. Overall, it wouldn’t be much of a surprise to see Pinterest jump in popularity with influencers in the near future, especially with the recent opportunities for influencers to earn more money.

The success of influencers rests in their authentic voice to their followers. That voice needs to be conveyed in a natural way, which Instagram and Facebook dynamically support, along with being uniquely able to foster engagement. However, with over 100 million monthly active users, influencers who are not prioritizing Pinterest strategies alongside their other audience platforms are missing a significant revenue opportunity. It will be interesting to see if performance seen through commission tracking will start boosting Pinterest’s popularity among influencers.

To say this has been an interesting month for Facebook might be an understatement. Much like other high profile websites, Facebook has been looking to find a way to combat against ad blocking usage on their site. On August 9, Facebook had announced that they had found the solution – by changing a bit of its technology on the back end, Facebook was able to circumvent ad blockers from functioning on their site without disrupting the user experience.

Ad blockers – specifically, Adblock Plus – decided to combat that. Not even a day later, Adblock Plus announced that they had found a way to go around Facebook’s blocker and block the ads on Facebook once more. Facebook updated their efforts later that day to once again block Adblock Plus. A day later, Adblock Plus cracked Facebook’s new update and were back to blocking ads. This back and forth continued for several days until Facebook figured out how to hide all ad code in their advertisements so that it’s harder for ad blockers to figure out what ads are ads versus legitimate content.

It’s easy to see why Facebook wants to block the ad blockers. The social media company brought in over six billion dollars in advertising revenue this past quarter alone. While 84% of this came from mobile advertising (which is not blocked), it’s not hard to guess why – after such a strong quarter performance – Facebook would look to boost their desktop revenue. 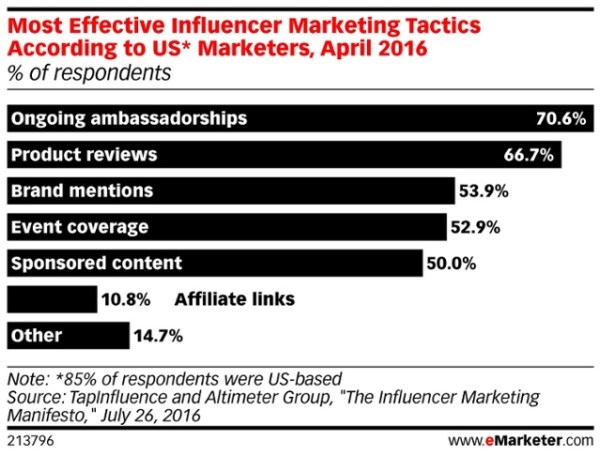 This victory for Facebook is good news for advertisers, but for influencers was this even on the radar? Not really.

With Facebook being the most popular social media platform for influencers to use, affiliate marketers that took advantage of native marketing opportunities through influencers wouldn’t have too much to worry about. An influencer’s strongest marketing attribute is their ability to advertise in a way that their audience wants. The audience chooses the influencer for product recommendations, opinions, and insights. Influencers, in turn, turn their audience into customers with their recommendations – and without having to rely heavily on paid advertisements. The graph on the left shows that “ongoing ambassadorships” is the top reason for partnering with influencers, and further supports why influencers work so well. The audience is in control of their marketing because they chose to be marketed to by that influencer. In turn, the influencer chooses which advertisers they partner with, and becomes an ambassador of a product or advertiser for the influencer’s audience. In the world of affiliate advertisers, influencers provide two necessary solutions: ways to reach target demographics, and a way to do that without worrying about software disabling their marketing efforts.

Influencers Win the Gold in Marketing During the 2016 Rio Olympics

The Olympics have come and gone, and as always there are plenty of stories to take away from the Games. However, one story that many marketers have been discussing for some time has been the marketing challenges surrounding the Olympics. Companies and competitors alike had to work around Rule 40, a rule from the IOC and USOC that essentially boils down to saying that if you’re not an Olympic sponsor you, as a company, has to pretend the Olympics aren’t happening. There were restrictions on words that companies were not allowed to use (including “summer”, “medal”, and “games”), advertisers couldn’t retweet Olympic-related posts on social media, and even something as simple as “good luck Team USA!” would have been in violation of Rule 40. Likewise, athletes were also highly restricted from what they could and couldn’t discuss/retweet on social media, though that had been lightened in 2015. And, while in 2016 there were showings of ambush marketing from big brands, there was an interesting solution that some companies took advantage of that circumvented Rule 40 without the need for ambush tactics: influencer marketing.

In the affiliate marketing channel, the benefits are transparent – the advertiser get to promote during one of the most-discussed sporting events of the year, they’re not in violation of the IOC, the publisher gets to continue doing what they do, and with the right effort there will be plenty of customers. Much like with Facebook’s ad block game of cat and mouse, the affiliate channel has a strong solution available.