Cyber Week continues to deliver big results for retailers and advertisers alike, and Rakuten Marketing is helping connect a growing number of retailers with the shoppers who are looking for them. The National Retail Federation reports that a record 189.6 million people did at least some shopping during the period from Thanksgiving through Cyber Monday, spending an average of $361.90 per person, representing 14 and 16 percent year over year growth respectively. Taking a closer look at the 2019 Cyber Week performance across multiple digital marketing channels – affiliate, display, and search – reveals some interesting insights around shopper behaviors.

Extending the Holiday Pays Off

The story of Cyber Week across the Rakuten Marketing affiliate network proved to be one that’s familiar across retail: Holiday shoppers will shop on the days that they have been conditioned to shop on, but shopping habits are evolving and that’s creating opportunity for retailers and publishers alike.

A closer look reveals that shoppers are responding to retailers’ attempts to extend Cyber Week even further. Thanksgiving had the highest average order value, likely spurred on by shoppers responding to early Black Friday deals and the growth in popularity of shopping online before and after the big Thanksgiving meal.

Meanwhile, the Tuesday after Thanksgiving – commonly known as Giving Tuesday or Travel Deal Tuesday – had the highest year over year growth of all the days from Thursday through Tuesday. This suggests that shoppers responded to retailers extending Cyber Monday deals into the following day.  Orders & Sales were up 24% on Giving Tuesday vs. 2018 in the US according to data from Rakuten Marketing Affiliate.

Think small to get big results

Smartphones accounted for roughly 37% of all online orders placed through the Rakuten Marketing affiliate network from Thanksgiving through Giving Tuesday (11/28-12/3). The shift towards smartphone shopping was particularly pronounced during the early part of Cyber Week, with smartphones accounting for 41% of all orders on Thanksgiving and 38% or more of online orders from Black Friday through Sunday, up from roughly 1/3 of all orders in 2018. 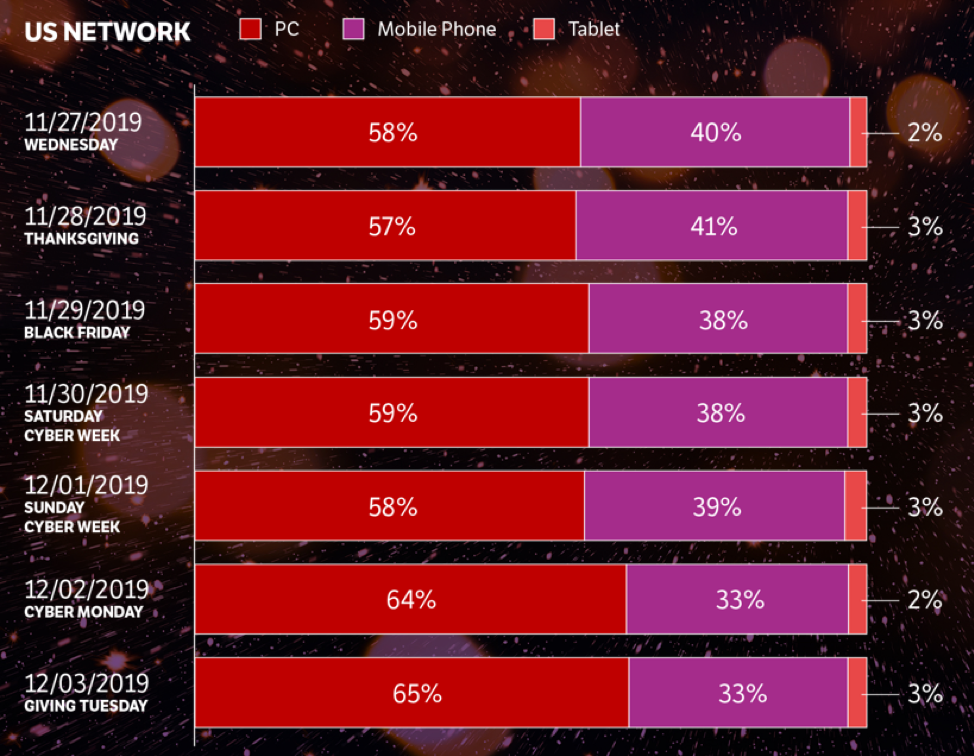 This suggests a couple of potential trends to keep an eye on:

Department Stores: Department stores on the Rakuten Marketing affiliate network saw a major spike in business on the Tuesday after Thanksgiving. Overall orders on that day were up by 73% year-over-year compared to 2018. This is likely spurred on by spontaneous and/or discount-driven holiday shoppers who, as highlighted above, took advantage of the fact that retailers extended their Cyber Monday deals into the following day.

Consumer Electronics: Orders of products such as video games and other electronic gadgets were up by 58% year-over-year on Black Friday and 45% year-over-year on Thanksgiving. This suggests that consumers were banking on those days having the best prices they were going to find throughout the holiday season and wanting not to miss out on that opportunity.

Footwear: Consumers were thinking on their feet on Cyber Monday. Overall orders of footwear grew by 28% year-over-year compared to 2018. Cyber Monday also posted the highest conversion rate for footwear retailers of the stretch between Thanksgiving-Tuesday at 6.5%.

Cyber Week shoppers had electronics on the brain throughout the five busiest days of the retail calendar year. The top selling products in order were:

The popularity of electronics during Cyber Week suggests that advertisers were more active about promoting deals on electronics than other product categories. This also suggests that shoppers have been conditioned to expect great deals on the latest technology and are continuing to respond accordingly.

What this suggests – Consumers are growing more comfortable browsing and buying on their smartphones but trust desktop more for higher dollar value purchases. This places the burden on retailers to make it easier for consumers to see more details about a product on their smartphone or make it easier for them to complete a purchase on a smaller screen.

Overall, search-driven clicks grew by 21% during Cyber Week 2019 compared to 2018, based on YoY, same-store data from Rakuten Marketing Search.

This increase of volumes in clicks led to a 31% increase in orders and a 23% increase in revenue.  This suggests that advertisers are getting better at tailoring content to meet shoppers where they are searching and shoppers are responding better to advertiser search campaigns. Overall, there were large lifts in revenue every day during Cyber Week, with Black Friday and Thanksgiving showing the strongest revenue growth at 37% and 50% respectively.

Shopper experiences need to be consistent across all channels given that lines between desktop and mobile have blurred. Advertisers that start Cyber Week promotions are going to win more business in the long run due to the fact that shoppers aren’t necessarily married to buying solely on Black Friday or Cyber Monday. Developing product page content that reflects who shoppers are shopping for can increase the odds that it gets seen by someone who ready to buy.