Casual Friday: How Businesses are Using Pokemon Go for Marketing

I enjoy taking walks during my lunch. Being located in the heart of downtown Chicago means that these walks are incredibly scenic: I catch tourists taking selfies in front of the Bean at Millennium Park, soak in a view of Lake Michigan at the Lakefront Trail, and walk by some of the most historic and dauntingly tall buildings in the country. (And for the record, it was and will always be the Sears Tower, not the Willis.)

But lately my lunchtime walks have been dominated by glancing frequently at my phone, occasionally raising it to view the sights of Chicago in the background of my screen while I try to catch birds, rats, electric mice, and other creatures. I, like the other 9.5 million daily active users, have been absorbed into the world of Pokémon Go.

For those of you that living under a rock (all three of you at this point) and aren’t familiar with Pokémon Go, the object is simple: walk around and catch Pokémon. Players accomplish this by walking around while the app tracks the user’s GPS location and, when a Pokémon appears on screen, the user tries to catch the creature through a ball toss mini-game. Catch the Pokémon and it’s yours – you can strengthen them, evolve them, or trade them in. Sound simple? It is. Seem somewhat shallow? It is. But what if I told you that shallow game already has over 100 million app downloads, broke the iTunes App Store record for most first-week downloads, and has a daily revenue of over $10 million through iTunes and Google Play stores combined.

Yeah, I know – suddenly a dinky little smartphone game becomes a lot more fascinating to look at, doesn’t it?

As a video game enthusiast I think it’s great to see – and not all that surprising, given the franchise’s $57.65 billion all-time revenue total since its 1996 Japanese origins. As a marketing professional, however, I think Pokémon Go is a fascinating case study for the marketing tactics it presents to businesses and potential influence on future marketing strategies.

How They Did it: A Look at the Marketing Genius of Businesses That Leverage Pokémon Go (And the People Who Play the Game)

Let me be clear about something upfront: I am absolutely fascinated by what Pokémon Go has accomplished from a marketing standpoint. And I’m not talking about the direct marketing that Niantic did to promote their AR, location-based game, nor am I talking about the marketing influences this game capitalized on (such as millennial nostalgia). I’m not even talking about the hilariously insane news stories that have come out from this game, ranging from a man playing Pokémon Go while his wife is giving birth, to over a thousand people gathering at Tsuruma Park in Nagoya, Japan because of a rumor there might be a rare Pokémon possibly showing up. All these things have been written about, but the real marketing potential of this game isn’t generated for the game itself, it’s what the game can offer businesses in their marketing strategy.

To understand how this game works as a marketing tool for local businesses, you have to understand how the game works. Players walk around as the game tracks them using their phone’s GPS. The game will spawn Pokémon on a map that a player can attempt to catch with PokéBalls. However, as a player walks they can come across in-game landmarks known as Pokéstops where players can earn items. These Pokéstops can be anything from parks and important buildings to interesting murals and (this is important) businesses. Bars, restaurants, big box retail, novelty shops, specialty shops, coffee shops, any kind of store you can fathom might get a Pokéstop.

(It should be mentioned, however, that Niantic chooses where Pokéstops are, meaning businesses can’t add themselves on a whim and need to speak with Niantic about the potential of getting a stop by them.)

It’s important to note that these Pokéstops can have something called a “Lure” added to them. What that does is essentially make that station a hot spot for Pokémon spawning, and allows users to hang out by the stop and wait for Pokémon to generate, rather than walk around. Each Lure lasts for half an hour, and users can see if a Pokéstop has an active Lure module on it because the Pokéstop looks like it’s throwing pink and blue confetti (shown in the top-left corner of the image below). Lures can be earned in-game over time, or they can be purchased from the in-game store for a small fee.

When you have 9.5 million people out and about looking for Pokémon, and you know that they’re likely to gravitate to places where their chances of catching Pokémon are greatest, you have to think as a business owner “maybe there’s a way I can take advantage of this.” And that’s exactly what marketing-savvy business owners have done.

The success stories have been coming in droves since Pokémon Go was released. An ice cream stand in Anacortes, Washington was able to save their business due to Pokémon Go. (The owner exclaimed “The Pokey light shines down on me!” when local news stations interviewed him.) Coffee shops, museums, pizza places, and even the zoo in Houston, Texas all offered special promotions or offers for playing the game by their businesses. Japanese McDonald’s locations saw a 19% jump in sales after losses the previous seven consecutive quarters by partnering with Niantic to make their restaurants sponsored Pokéstops. Businesses of all shapes and sizes are getting advice on how to take advantage of the Poke-craze. 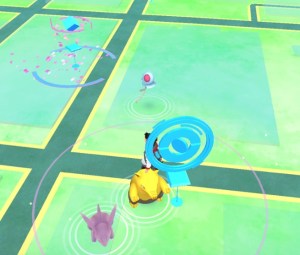 The hype is real, and there’s more than enough data to support the success stories as more than just feel good news pieces. A recent survey of Pokémon Go players from Slant Marketing showed the data behind how the game can be a boost for business. One key finding was that a staggering 82% of players have visited a business while playing the game. Of those visitors:

As mentioned, Lures last 30 minutes – roughly the same amount of time 48% of players stayed at the business they were visiting. But, most interesting of all, Slant found that the average spend of a person who visited a location while playing a game was $11.30. Mind you, Lures are .99 cents. The ROI speaks for itself. What’s more, players are visiting businesses because of this feature often: 33% said they visit businesses a couple times per week, and 18% visit businesses with Lures daily.

That’s not all. A PR Newswire study found that 59% of players are likely to enter a business with a Pokémon Go discount of some kind and that 59% have a favorable view of businesses that offer Pokémon Go promotions. So not only can business be boosted from adding Lures, but extra business and goodwill can be earned by theming products around the Pokémon Go game.

These aren’t young children or one gender, as the Slant survey points out. Men and women play this game alike according to Slant (59% of players are male, and 41% are female), and the average player is 29 years old with a $52k average household income. These are millennials getting their first whiff of childhood nostalgia and are thrilled to offer their patronage to businesses who will share in that with them.

Tip of the Iceberg: A Potentially Exciting New Trend in Marketing, Thanks to Pokémon Go 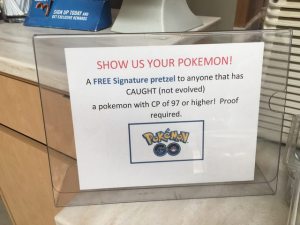 Pokémon Go is not the first app that rewards users for visiting locations, nor is it the first app businesses have used to try and attract customers. There are plenty of apps that encourage “check-ins” in exchange for rewards or to compete against friends and other app users. Yet, Pokémon Go seems to have cornered a marketing tactic in a way that other apps could only dream of. Part of this could be from the fact that Pokémon is so recognizable, and part of it could be from all the hype surrounding this app. But I argue that what comes after Pokémon Go from a marketing standpoint won’t look to match Pokémon Go in cultural impact; instead, it will look to refine the app’s marketing solutions.

I believe this because Pokémon Go has shown that there’s a lot of different potential marketing methods, such as:

And that’s just scratching the surface of what a marketing model, laid out by Pokémon Go, can do.

The challenge is, of course, getting users on board. Pokémon Go seemed to solve this issue through gamification. The app isn’t centered around connecting businesses to customers, nor is it focused on getting customers to patronize businesses – instead, it’s just a game. A game that marketing-savvy business owners have found a way to capitalize on. You could also make the argument that this works so well because it puts users in control of their own marketing – they choose to enter businesses or not enter them, and choose what they want what they get there. They’re not being funneled into choices, they’re experiencing a game and being brought to areas of business because of the design behind the game. The user is always in control and never feels deceived.

In the end, it’s all up for debate. Niantic was either smart enough to see the advantage of this, or they were lucky enough to know how to capitalize on it. This could be the next evolution in a new wave of marketing methods, or it could be a moment that comes and goes in the blink of an eye. Here’s what is known: a mobile app company that had only released one other app before this created something brilliant, and other brilliant people found great ways to incorporate its popularity into their marketing. That says something fascinating not only about the way we market in 2016, but the way customers willingly receive marketing. It’s a trend worth following, and one I’m looking forward to watching as time go on while I’m taking my walks and catching Pokémon.