Black Friday and Cyber Monday are fast approaching, and very soon a majority of consumers will start shopping for the holidays and looking for deals. In this advertiser edition of Network Trends we took a look at consumer behavior last year in the US, CA, UK, and AU networks to evaluate how customers are shopping, when they start, when they’re most likely to buy, and what they’ll be looking for come Thanksgiving, Black Friday, and Cyber Monday 2016.

Contents and Notes (Click on a topic to go to section):

Consumers like to jokingly complain that the holidays keep coming earlier each year, and if their shopping behavior is any indication they may be right. According to Rakuten Affiliate Network research, last year almost half of internet users started their holiday shopping one to two months before Thanksgiving, and this year many will start as early as October. In addition, the cutoff for holiday shopping has gotten later into December thanks to faster shipping options, thereby extending the holiday season so that it starts earlier and goes later. But there are more reasons why consumers are feeling the big holiday season come early.

Mobile shopping has gone from novelty to integral, and last year’s holiday season showed just how significant a change that’s become. Based on Rakuten Affiliate Network’s data, mobile sales grew 59% year-over-year (YoY) from 2014 to 2015, and generated 40.5% of holiday traffic during 2015. Saying that’s a large jump would be an understatement, but it’s also not surprising. Mobile devices such as smartphones provide access to shopping from anywhere at any time, making them optimal for researching last minute deals, finding flash sales, exploring different offers, and selecting a product to purchase. All this can be done from the convenience of a palm-sized device that can be used while traveling or spending time with family. 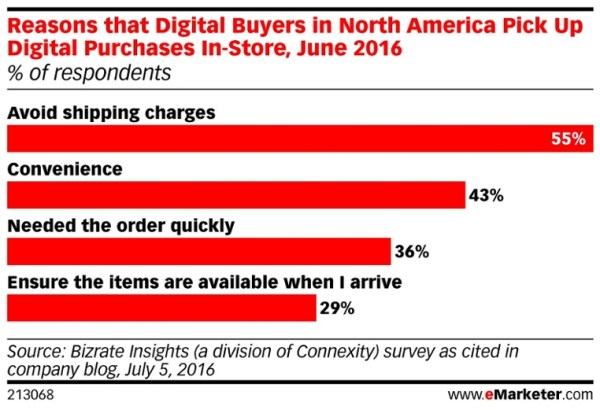 Mobile is just one of the many reasons that e-commerce grew 13.4% during the holidays last year, but it’s not the only reason. One trend that was shown to be on the rise last year is in-store pickup. According to the International Council of Shopping Centers, 32% of holiday shoppers made a purchase online for in-store pickup. As shown by the eMarketer graph on the right, in-store pickup is increasingly popular because it provides the convenience of online shopping with the immediacy (and lack of shipping costs) consumers get from in-store shopping. Additionally, this method also helps customers avoid a trip to the store without knowing if the product they’re looking for is in stock or not. The real advantage, however, is that it allows the customer to provide business to that retailer by reducing the amount of time they have to dedicate to going shopping in a store – they can shop online on their own time, buy the product when they’re ready, and pick it up when it’s convenient for them.

The holiday season lasts longer thanks to consumer behaviors, but key dates for holiday shopping remain the same. Thanksgiving, Black Friday, and Cyber Monday are three of the most crucial shopping days for advertisers, and it’s important to be prepared for the rush of customers that will be looking for the best deals during those days.

Thanksgiving may be the day where families come together to eat turkey, watch football, and relax, but mobile devices have allowed families to take care of some online shopping while enjoying being together. One data point in the Rakuten Affiliate Network showed that e-commerce sales on Thanksgiving outpaced both Black Friday and Cyber Monday last year. It’s not hard to see why – more advertisers are trying to promote more deals earlier on in the week to make sure they grab the attention of consumers, and some retail stores even opening during the evening of Thanksgiving rather than the early hours of Friday morning. Additionally, customers are shopping earlier because they have easy access to shopping via their mobile devices, regardless of if they’re at home or on the road. If you’re an advertiser looking to take advantage of this trend, the best practice is to promote your deals earlier in the week so that consumers will be aware of them in advance and know to return to your offers. These early awareness offers will save customers the time of having to shop around on their devices, while ensuring they’ll still get the deal they wanted to get.

While Thanksgiving is rising as an important shopping day for advertisers to stay aware of, Black Friday and Cyber Monday are still kings when it comes to conversions, with last year’s sales days earning 6% and 6.8% conversion rates respectively, compared to just 4.9% customer conversions on Thanksgiving. Knowing when customers are converting during these all-day deal marathons is just as important as knowing what they’re looking for.

On Black Friday you’re most likely to see customers converting in sales early, with 9 am being the peak hour for both traffic and sales. This is likely because customers will be shopping in the morning, making selections, and then using in-store pickup options or other delivery methods to get their products, before leaving for the day to shop in-store only sales. On Cyber Monday, the opposite is true – customers will be waiting until the evening to ensure that they’ve seen all the deals that spring up during the day and will feel most confident browsing deals and choosing to buy at around 9 pm. With most companies returning to work after the Thanksgiving holiday, this evening peak time could also indicate that most shoppers aren’t browsing much during the workday, saving their decision making for post-business hours.

The UK showed strong traffic and conversion during Cyber Weekend, with an hour-by-hour analysis showing that online sales and searches were both strong from the morning (between 6 and 9 am) until the very end of the day, with a major drop off in traffic and sales happening around midnight. As illustrated by the hour-by-hour breakdown of the weekend below, traffic was at it’s highest during Black Friday, but conversions had their highest point for a two hour window on the evening of Cyber Monday, from 21:00 to 23:00. Click the graph below to enlarge: 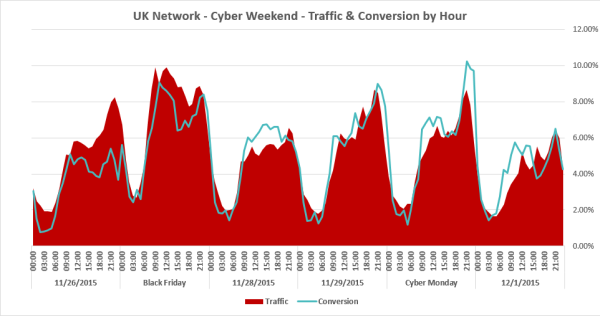 Based on this data there are a few recommendations that advertisers should consider. First, with searches getting a bump starting Thursday evening (likely due to most shoppers preparing for the weekend by seeing what’s out there), start promoting your offers early and send reminders around those peak times. Sales tend to dip on the Saturday after Black Friday, and pick up again during the day and evening on Sunday, before plateauing the next evening on Cyber Monday, so try to target those windows in particular for sales, or look for gaps during the day Saturday to help your offers stand out. Since most shoppers made purchases Monday evening (likely worrying that this was their last chance for deals, or because they were ready to purchase after a first day back to work), you may want to consider a flash sale starting a little before and going a little after that period.

When examining what products were searched for and sold best, the results are important for advertisers to be aware of regardless of what vertical their products fall under. Although High-End/Luxury Stores generated the most traffic during Black Friday and Cyber Monday, they generated some of the lowest conversion rates of any of the verticals looked at, just barely ahead of Jewelry and Footwear. This could likely be due to customers wanting to find the deals offered by High-End/Luxury Stores but then do their shopping in-store to ensure that they’re getting the product they want without the worry that the product may show up damaged or not as they envisioned. Apparel and Accessories verticals had the second highest amount of traffic and the highest amount of conversions. This could be due to the lower cost when compared Luxury Stores causing the increase in sales, or it could simply be the lower price point driving more sales. Additionally, Gifts had some of the lowest amounts of traffic but had the highest conversion rate for the amount of traffic they generated. These could be anything from little add-ons at checkout to greeting cards or personalized items, but in all cases, the customer will know exactly what he or she is looking for and don’t need to shop around as much. Click the graph to enlarge: 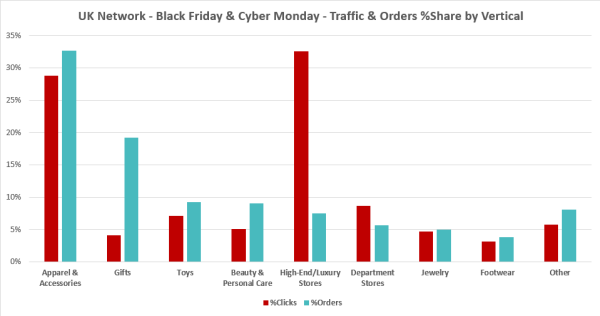 While the UK network showed that traffic and conversions were steady during the day on Black Friday, with conversions on Cyber Monday coming towards the end of the day, the Australia network’s data displayed a very different story.

Black Friday conversion rates were consistent throughout the early morning hours but dropped off significantly after 11:00 or so. During that drop off, the amount of traffic had a significant bump (the highest it would be during Cyber Weekend) before dropping off significantly as well. This could likely be due to customers doing online shopping in the early hours to capitalize on Black Friday deals and learning about in-store offers before heading out in the late morning/early afternoon for in-store shopping. For advertisers looking to capitalize on consumer behaviors during Black Friday, take note that traffic is most likely to come from Midnight on Black Friday to around Noon that day, so be sure your deals are displayed clearly and easily accessible. Run awareness campaigns during that time as well to try and get the attention of shoppers who may have previously not been aware of the offers you have going on during that day. Click below to enlarge: 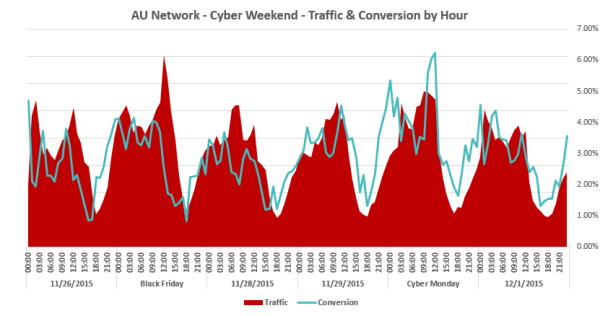 Cyber Monday also differed greatly from the behavior of the UK shoppers. While UK shoppers seemed to buy later in the day, Australian consumers started buying at midnight (eclipsing Black Friday and the weekend in conversions), took a small dip in the early morning, and then hit their peak during noon on Cyber Monday before dropping off significantly in conversions. There was a small rebound towards the end of the day, but nothing compared to the very beginning of Cyber Monday or in the early afternoon. These are fascinating insights to see because, when compared to the amount of traffic going on during Cyber Monday, it’s clear that more consumers are looking to buy rather than shop and evaluate as they may have done on Black Friday and during the weekend. Consumers know what they’re looking for by that point, they just want the deal that will get them what they want.

Before Cyber Weekend in Australia, however, there is another day that advertisers should be aware of: Singles Day. Singles Day takes place every November 11 and has become a popular “new” holiday in Australia as a celebration for people who aren’t in relationships. Based on data from last year’s Singles Day you’ll notice nothing out of the ordinary traffic-wise, but conversions saw a huge jump during the day, especially in the mid-afternoon. While not as big a shopping phenomenon as Black Friday or Cyber Monday, using Singles Day as a way to start generating early conversions while also building awareness for any deals you may have in the coming weeks can yield extremely positive results for advertisers who are looking to separate themselves from the cluster of sales and deals that consumers are being bombarded with. Click below to enlarge: 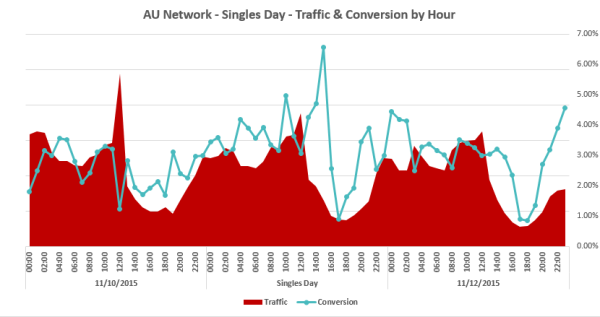 Special thanks to this month’s contributors: