Halloween season is here, and shoppers are looking for the best deals on costumes, decorations, and candy that they can get! Understanding how consumers shop this year is just as important as knowing what the most popular costume is, and in this guide we break down everything you’ll need to know about how people are looking for frighteningly-good deals: from what their projected budgets are and how they like to find their deals, to what the popular costumes and candy choices are. 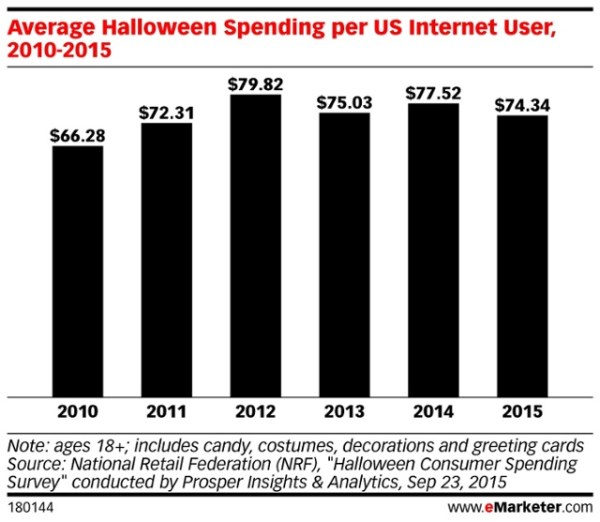 1. Halloween Shoppers Fear Spending Too Much…: Last year in an eMarketer survey, almost 79% of surveyed shoppers said their goal was to spend less money during the upcoming Halloween season. The average shopper is looking to keep a budget of $75 dollars for everything from candy to costume, according to a National Retail Federation report from 2015. This is an understandable goal for many shoppers since Halloween falls between the two most expensive times of the year in back-to-school shopping and holiday shopping. In addition to that, a lot of Halloween expenses focus on consumable goods (candy), costumes worn only a couple times, and seasonal décor. But…

2. …They Don’t Let Fear Deter Them: Despite having a goal of spending less overall, 2015 was a pretty average Halloween season. Consumers spent about $6.89 billion dollars on Halloween costumes, candy, décor, and cards in 2015, slightly lower than the past few years but by no means a significant drop-off. When considering the previous point about surrounding seasons/holidays, it makes the Halloween season actually pretty impressive.

3. Halloween Activities Scare Up Attention: Halloween is a time where consumers can live out their own personal horror movie experience by going to a haunted attraction of some kind: a haunted house, a haunted hayride, a ghost tour, or even a theme park with a Halloween treatment. Last year, the National Retail Federation reported that over 28.5 million adults planned on attending a haunted house attraction of some kind. This type of seasonal opportunity is ripe for offers to help build awareness and draw crowds looking for a scare on a fall night.

4. Candy Crush: Halloween is, for many, a time to go around the neighborhood and fill a pillowcase with free candy. And, for consumers, October is the time of year to purchase candy, with 45% of candy and chocolate being purchased during this month. The two other major times? September (26%) and November (29% – likely taking advantage of candy clearance sales!).

5. From Cinema to Costume: The popular costumes this year will be focused around movies, but with a twist – there will be a mix of new franchises to the silver screen as well as some old classics. Superhero movies such as Captain America: Civil War and Suicide Squad will make for popular choices this year, and given the expansive amount of characters in each movie you can expect shoppers to go from complex costumes like Iron Man’s suit to something more simple like Harley Quinn’s hair dye and signature bat. But with the resurgence of iconic franchises like Ghostbusters and Star Wars you can expect an equal amount of people to be shopping for a Proton Pack or Lightsaber.

6. Simple Costumes Always Hit: Of course, not everyone wants to dress up like a character from a movie – some just want to go for classic costumes. Witches, werewolves, vampires, mummies, and all the other staples of the season remain popular options for their simplicity, timelessness, and affordability for consumers. While promoting licensed costumes from popular movies helps, be sure to help out consumers looking for something more accessible and, in some cases, cheaper.

7. Online Shopping’s Frighteningly-Good Benefits…: Halloween has a strange dynamic when it comes to online shopping. On the one hand, consumers love the benefits of making a Halloween purchase online. Not only does it provide them with more inventory than a brick and mortar store (making more niche costumes or certain sizes easier to find), they also believe they can find lower prices than in-store costumes. And that’s not even mentioning the convenience of being able to shop from their own devices, at home or on the go. Free shipping also remains the top priority for consumers who want a specific costume in a specific size, but don’t want to pay a premium (shipping) for it!

8. …But In-Store Shopping is Still the Halloween Norm…: That said, most consumers actually prefer to conduct their Halloween shopping in physical stores. An eMarketer survey gave a multiple choice list of options to consumers asking where they preferred to shop for Halloween products, and 94% chose to shop in-store. In addition to this, 83% of spending from the Halloween season was expected to come through in-store purchases.

9. …So a Hybrid Model Might Work Best: Halloween is still very focused on storefronts for the point of purchase, and rightfully so. This is a holiday that relies on shopping for candy, costumes that are made to fit wide ranges of body types and need to be tried on, and décor that might be easier for consumers to decide on by seeing it on display. But consumers are also branching out and using digital means for the convenience, breadth of products, and possible sales. Free shipping is a key driver in online sales, and even though only a small portion (12%) plan to shop online and have their products shipped to their home, that’s still a significant amount of revenue for a short holiday season. Consider having any sales you have going on online to be matched in store. Promote free shipping. If you’re offering a coupon, have it available for both online and in store.

10. A Short-and-Fast Shopping Window: As mentioned above, Halloween shopping falls in between the two biggest shopping seasons of the year so shoppers are looking to get their deals early, make selections early, and enjoy Halloween before moving on to the holiday season. Shopping trends show that the two most popular shopping windows for consumers are starting before October (38%) and during the first two weeks of October (42%). Few will wait until two weeks before Halloween to get started (13%) and even fewer wait until the week before (7%). Early shoppers may prefer to take advantage of sales that happen early on (“10% off everything on opening weekend”), while October shoppers may want to wait until inventory is stocked up and full before starting, so be sure to promote any offers and raise awareness of available products during this window.

11. Millennials are the Key Demographic: The target demographic for the Halloween season is Millennials. Last year, a staggering 81% of people ages 18-34 planned on celebrating Halloween, with 70% planning on dressing up and almost half of them planning on hosting or attending a party, Millennials make a majority of Halloween celebrations – and therefore, Halloween spending. They’re also likely to look for Halloween costumes online through a number of different avenues, so publishers would be wise to promote out ideas for different costumes for people to help guide Millennials to picking an outfit that’s right for them!

12. Pinterest Becomes a Halloween Haven: Pinterest is great for do-it-yourself ideas, and Halloween is no exception. Last year 25% of Millennials planned to use Pinterest as a way to find cheaper or do-it-yourself alternatives for costumes, rather than going through a store-bought route. Since 18% of people said they would make their own costume as a way to save money, this is a very real solution for many consumers – and many affiliate marketers. Advertisers who may not otherwise think to offer a Halloween deal, this is your opportunity to step in and partner with a publisher who utilizes Pinterest boards for do-it-yourself solutions. Since Pinterest is allowing affiliate links to be posted, this is a huge opportunity for advertisers, publishers, and consumers who are looking for an alternative on Pinterest but may not know where to get the materials/how to get started.

13. The Spooky Life of Pets: Pet costumes are fun and popular, with 20 million people last year planning on dressing up their dog, cat, or other pet in some costume. The National Retail Federation reports that $350 million is spent on pet costumes. Pet costumes tend to be purchased more early on, with 17% of costumes purchased for pets happening in September, compared to just 3% in October. Additionally, most Halloween pet toys don’t happen until November, with 55% of consumers buying toys during the post-Halloween clearance sales, compared to just 45% during October.

Have a great offer in mind to push out to customers? Got a piece of content you’d love to publish and sprinkle with the latest Halloween deals? Whether you’re a publisher or advertiser, Seasonal Offers is a great place to post your deals or find new ones to promote. Advertisers and publishers in the Rakuten Affiliate Network can start taking advantage of these opportunities today! Click below to create a new offer or find available offers to publish.