Experimentation, data and customer experience. That’s the name of the game for forward-thinking, innovative digital marketing and business executives committed to staying ahead of the pack in Australia. In August of this year, Optimizely, the top experimentation platform, opened its first official APAC office in Sydney, a testament to the rapidly growing interest in, and embracing of data-driven experimentation and conversion optimisation.

In 2012, a research study found that on average, there was a ratio of $92:$1 for traffic generation versus optimisation. In other words, for every ninety two dollars companies were investing into getting traffic to their website across paid and organic channels, only a measly one dollar was invested into helping ensure that website visitor actually converted.

The launch of the Optimizely office in Australia signifies yet another reminder that  ‘2017 is the year that conversion rate optimisation and personalisation begins to go mainstream in Australia’.

Far from being a U.S. company with simply an Australian presence, Optimizely has grown by leaps and bounds in the APAC market. They count leading Australian companies and brands among its customers, including Optus, AGL, Fairfax Media, Chemist Warehouse, Fox Sports and Kogan.

In Australia, Optimizely are reporting 257% year-over-year growth in product usage — helping to improve customer experiences for over 28 million users: more than the population of Australia itself.

According to Dan Ross, the Managing Director of Optimizely ANZ, the company “chose Australia to be its APAC home because of the increasing demand for innovation from business across sectors, strong organic growth in the market and talent density throughout the region.”

He adds, “this new home brings us much closer to our growing customer base where we already have strong relationships with businesses in the retail, media and travel sectors.” He continues, “we are also seeing considerable update by businesses in industries with more traditional business models such as utilities, superannuation, health insurance and telecommunications.” 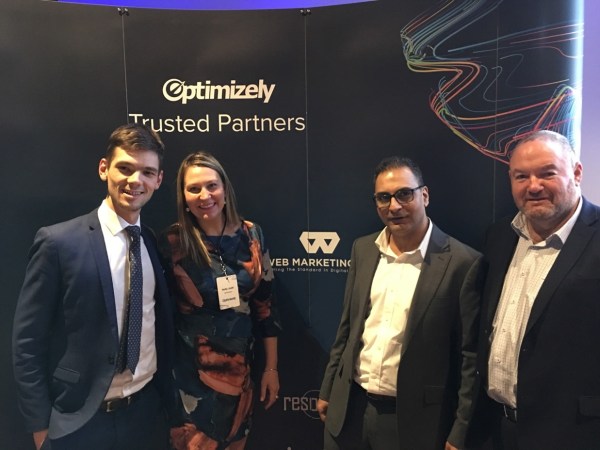 In short, top brands in Australia today are facing the very real and ever-present threat of competition from newer, growth-focused and agile players.  In order to innovate quickly, these companies have to invest in an experimentation platform that gives them meaningful, impactful information so that they can make data-backed decisions with confidence.

Mr. Ross elaborates on this concept, calling it “The Amazon Effect” — wherein local retailers begin to quickly conduct experiments and tests to help strengthen their position ahead of Amazon’s arrival. Amazon itself is founded on a constant drive to innovate and experiment, so the clock is ticking for small, medium and large businesses alike to experiment and test — not just in one channel, but all.

Tackling the Challenges of an Expanding Market

In the same month as Optimizely announced its official launch party and APAC office launch, Rakuten Marketing, too, was planning a celebration of its own – in the form of the Rakuten Marketing Symposium in Sydney. This exclusive, one-of-a-kind event brings together high-level executives, key decision makers and influencers to forge new business partnerships and strengthen competitive positions.

Rakuten Marketing APAC has already established a strong relationship with Australia’s most technically-savvy Optimizely partner, Web Marketing ROI. Through their extensive knowledge of both the Optimizely system and conversion rate optimisation as a whole, Web Marketing ROI has helped many top brands – across the country and around the world.  Their impressive client list boasts well-known names including: CrownBet, AGL, RMIT University, Kathmandu, Miele, Chemist Warehouse and Country Road Group.

This unbeatable partnership has allowed both Rakuten Marketing and Web Marketing ROI to concentrate their considerable knowledge and expertise into providing data-driven, digital marketing solutions for some of the leading digitally-focused brands in Australia.  As a Platinum symposium sponsor, Web Marketing ROI brings unparalleled experience to what is quickly becoming a recognised and in-demand industry in Australia.

Web Marketing ROI CEO James Spittal notes, “Six years in conversion rate optimisation makes you a veteran in what is still an emerging market in Australia. It’s exciting to be leading the charge as Australian digital marketers learn how to tackle the most difficult digital discipline of all. The most successful brands in Australia are starting to wake up to the fact that it makes more sense to allocate 10% of their media budget to conversion optimisation, rather than simply throw more money at paid media – and hope for results. If you aren’t launching at least 6 high quality A/B tests per month, you’re being left behind.”

Leveraging data science along with proper segmentation and user behavior analysis combined with consistent experimentation and testing is what truly brings businesses – in Australia and beyond – the kind of solid, reliable results they want, and companies like Optimizely, Rakuten Marketing and Web Marketing ROI are ready to help those innovative, agile businesses take the next successful step toward making conversion optimisation part of their overall strategy.

This has been a guest post from Rakuten Marketing Symposium sponsor Web Marketing ROI, for more information please visit: webmarketingroi.com.au